So you’ve come to an Apple developer conference. You probably like iOS a lot. I don’t really have a problem with that. Really. That said, every mobile development project I’ve been involved with since leaving university has involved the development of both an iOS app and an Android app. Many projects you encounter will be similar.

In this talk, I’ll don my my rotten tomato-proof jacket, and go behind enemy lines to help show you, the iOS developer just how things look on the other side. During the talk, we’ll cover Android’s design philosophies, in terms of app structure, visual and interation design, as well as some frank discussions of the “fragmentation problem” that you’ve probably heard so much about.

We won’t be covering any code, because really, I don’t want to completely scare you away with Java.

By the end of this talk, I won’t have convinced you to drop everything and start working on Android right away… that would be silly. However, you *will* be armed with a good understanding of the platform, why some people like it, and a good understanding of how to communicate design ideas with Android developers. You may even have some ideas that you can take back to your iOS apps.

The world’s a happier place when everyone understands each other and works together, so let’s make more of that happen. 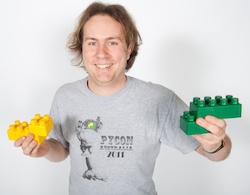 Christopher is a programmer from Hobart, Tasmania. He currently works as an Android developer, which means his day job involves more Java than he would like. He is strongly involved in Python community development around Australia and the world: he is an immediate past convenor of PyCon Australia 2012 and 2013, a board member of Linux Australia, and has been a fellow of the Python Software Foundation since 2013.