Creating a very responsive UI is one of the hallmarks of a great app. But with so many generations of iOS devices out there, keeping an app running at 60 frames-per-second across the board can become a real challenge!

This talk covers a range of techniques that can be used to help speed up the responsiveness of you apps, from optimising view layout and draw times in low-latency tactile elements such as scroll views to setting up complex animations in Core Animation. It also covers methods for measuring your apps’ performance in Instruments to locate and weed out bottlenecks. Anything less than 60FPS is unacceptable! 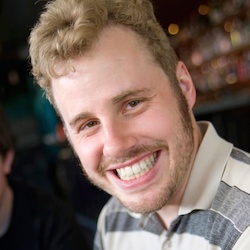 Tim has had a burning passion for iOS development since he got his iPhone 3G in 2008.
Currently, he works as a full-time developer of mobile applications for corporate clients at Lateral Pty Ltd in Perth, after spending a year developing in-house iOS software for pixiv Inc in Japan.

In his free time, Tim is also currently working on a comic reader app for iOS called iComics, which was released during /dev/world/ 2012 and has since been downloaded over 50,000 times.