Every now and then it’s nice to do something different¹. For some, this means writing code. And for that special group, it sometimes means writing ‘things’, that work on ‘that Apple laptop, you know, for that guy who works out in the field’.

This talk will examine the new Swift language from the perspective of one who sparingly uses Objective-C. What does an outsider really think of the Apple eco-system? For those coming in from the ‘cold’, what are the pitfalls and gotcha’s? What amazing things are there to be discovered? And, how can we make the transition easier?

So, come join me on that old, familiar, horrifying journey—learning just enough of a new language to write something awful! But hey, at least it gets the job done!

¹Half hour later…‘WHY DID I AGREE TO DO THIS?’. 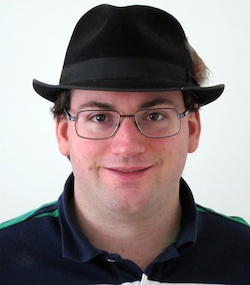 Matthew spends his days, slaving away in a metaphorical basement, trying to fix scary databases (no, a phone number is NOT a primary key!), maintaining terrible websites, despairing at the fourth drive failure of the day, and generally being pulled from project to project.

When he’s not working on technical tasks, he’s off writing papers, organising conferences and streams (e.g. PyCon AU, OzCHI24), and designing his doomsday bunker that must by necessity be completely cut off from the Internet, ‘The Cloud is trying to kill us all!’.