With the release of the iPhone 6 and 6+, iOS developers have to support an unprecedented number of screen resolutions. This session examines best practices in the use of Auto Layout. We’ll start with a basic introduction to Interface Builder, and show how best to use it to lay out views so that they look beautiful on any device. We then look at how to generate constraints in code, and finish by looking at common gotchas. This talk may contain moderate hip hop references. Attendee discretion advised. 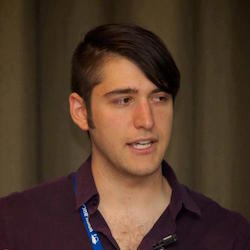 Sebastian graduated from UTas in 2012 with Honours in Computing, focusing on artistic computing via evolutionary sound synthesis. He has played with the Tasmanian Youth Orchestra and Grainger Wind Symphony, and has spoken at programming and artistic computing conferences, including TEDx Hobart. He currently works as an iOS developer at Domestic Cat Software. He doesn’t particularly like hip hop, but has been known to occasionally spin Kendrick Lamar.