This talk introduces making iOS apps with Go, an experimental feature of Go 1.5. iOS apps are generally supposed to be made in Xcode with Objective-C or Swift, as God intended, but there’s more than one way to skin an idiom. Go is a simple language invented at Google originally intended to replace C and  C++, but has grown to the point where it can be suitable away from the world of server software. For the first time, in version 1.5, Go includes packages aimed at mobile development. This talk will introduce Go, how to get setup with gomobile on Mac for iOS dev, and how to use gomobile to produce both standalone apps and framework bundles usable inside Xcode projects. 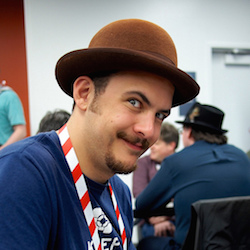 Josh is a software engineer at Google Australia. He has a PhD in mathematics from the University of Tasmania. He likes cats, but is unfortunately allergic.