In this session we’ll talk about how playing games over the network impacts both your game’s design and architecture, how to deal with latency and constrained bandwidth, and why variable lag is worse than the very devil himself. We’ll be using Unity 5.1, which includes a host of new and improved networking features, to build a top-­down shooter. At the end, you’ll know how to design multiplayer gameplay, how to deal with the network, and you’ll be seized with a bunch of ideas for games that you’ll want to make yourself. 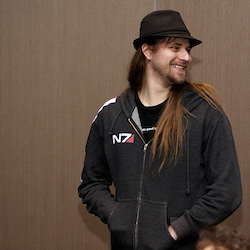