iOS was once a single screen size platform, brought to you by the magic numbers 320 and 480 – it was easy to create a pixel perfect UI. Over the years the platform has evolved to support multiple screen resolutions, requiring image assets at myriad different sizes. Our designers are working their beautiful fingers to the bone, and our bundles have never been so big. PaintCode takes your artwork and turns it into resolution­-independent CoreGraphics code, which you can drop straight into your apps. You get crisp graphics on any screen, and the ability to do things that would otherwise require many static files. 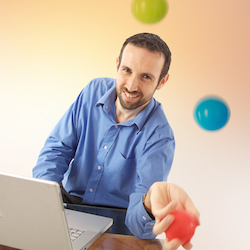 James is an iOS developer and designer, with the correct order of those terms a matter of debate. He makes apps primarily of a healthy nature, including as part of his PhD examining social apps in health promotion. He recently received his second student scholarship to attend Apple’s WWDC.